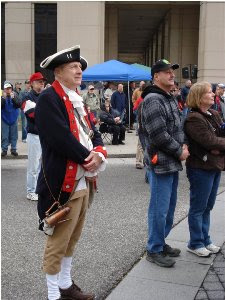 A Democrat consultant, Chris Sautter, who writes a column carried on Howeypolitics.com, slams Richard Mourdock, Jackie Walorski, and the Indiana Tea Party at large. While appearing to be challenging Donnelly not to underestimate Senator Lugar, his understanding of Indiana political climate falls short in typical leftist perspective. He spins Indiana Treasurer Murdock's failure to halt Presidential intervention in the Chrysler bailout as being anti-jobs for Hoosiers, but overlooks the initial thrust was to protect pensioners and highway construction funds so those funds would not be forfeited in an illegal Presidential bankruptcy dictate that sidestepped legislative and judicial law in favor of creating an Executive fiat playbook likened to King George. Tea Partiers have recognized this and applauded him for his legal effort (the Supreme Court simply failed to get involved to hear the case).

He spins Walorski's close loss to her 'weaknesses' and as 'unimpressive', disregarding her massive appeal that nearly toppled Donnelly in his own district.

He grossly misinterprets the tenor of grassroots Hoosiers "But Tea Party strength seems to have crested and, besides, Indiana has not proven to be the hotbed of Tea Party activism that other states have." Despite Mr.
Sautter's wishful thinking, he must have been absent six months ago in November. Outside his radar are over 70 distinct tea party affiliates throughout Indiana meeting regularly; some with workshops, lectures, discussions; some emphasizing training on social networks and Constitutional seminars and webinars. What he may construe as post-election withdrawal is that Hoosiers are quietly working in educating themselves in politics 101 more than rallying. No longer can any election be held without the TEA Party factor. When Hoosiers have to work 1/3 of their working life just for the Government, they learn one thing: they are Taxed Enough Already. Article
Posted by Patriot Paul at 8:48 AM 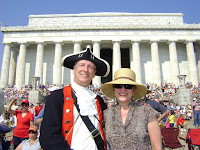 One half million patriots from across the nation showed up on 8-28 at the foot of the Lincoln Memorial in DC. at the request of radio and TV talk show host, Glenn Beck.  Much already has been written about this wonderful event where the generic themes of God & country, specifically faith, hope, & charity were the emphases.  Perhaps the most impressive for me were the large volume of families with children sitting atop shoulders.  I hope these young people will burn the experience in their memories.

More Pictures on Facebook
Posted by Patriot Paul at 9:49 PM 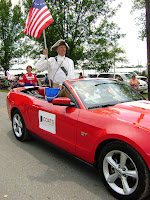 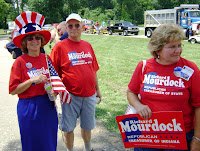 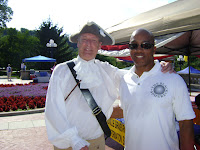 Frankfort, Kentucky’s State Capitol was the sight of several hundred Tea Partiers who gathered to celebrate their liberties and to protest the increasing size of government.  On July 10th, people were bused in from other communities and attendees came from Ohio and Indiana.  Participants included several speakers including Leland Conway with Lexington’s AM 630 WLAP station, Attorney Kent Brown, Dan Blanchard, Pres. Louisville Tea Party, Dr. Rand Paul, Andy Barr, and Todd Lally, all conservative candidates. Rand Paul instructed the crowd about the opposition, including aspects of the media:  "We must not let them describe who we are, WE must describe who we are. We cannot let them characterize us. There has been a concerted effort since the Tea Party began to rise ... to paint us as something we are not."  Kevin Jackson of The Blacksphere and the author of The Big Black Lie provided a tongue in cheek speech that could make you both laugh and cry. Yours truly led the pledge. More photos
Posted by Patriot Paul at 9:30 AM